The Case Against Robotic Knee Surgery

Robotics in medicine is becoming pervasive, and it has become a big business both for the companies that make and sell these devices, as well as the hospital systems and physicians that use them as a potential marketing tool to attract patients on the basis of their purported benefits. While certain robotic applications such as the DaVinci surgical robot have proven to significantly improve outcomes for procedures such as gall bladder removal, hernia repair and other abdominal surgeries, the use of robotics in knee replacement has more of a mixed history. The most popular such robot is called the Makoplasty which is now owned and distributed by Stryker, a global orthopaedic corporation with a market cap in the billions of dollars. Other companies such as Zimmer/Biomet and Smith and Nephew have also introduced robots called the Rosa and Navio respectively. Some of these robots cost each healthcare system millions of dollars to purchase along with expensive maintenance and service contracts to maintain.

Companies that sell these systems and physicians that use them often claim that the use of a surgical robot in knee replacement leads to a more rapid recovery and better long-term outcomes. Quotations like the following are common but not backed by any science. “With the increased precision, hip and knee implants can potentially last 20 to 30 years instead of 10 to 20.” The basis of these claims is that the robot allows more precise placement of the implant and this in turn translates into less postoperative pain, better range of motion, earlier discharge from the hospital and better function once fully recovered. In fact, robotically-assisted total knees have not been followed for long enough to claim a 20-30 year track record. 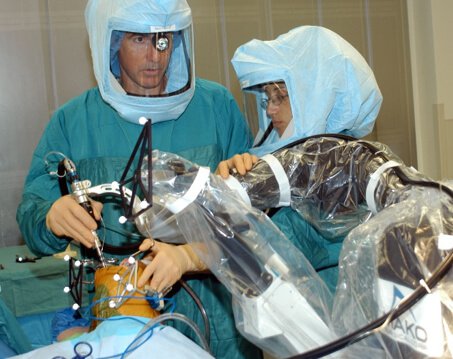 While some industry-sponsored studies have demonstrated short-term improvement in robotic-assisted total knee outcomes, many others have failed to show any difference compared to total knees done using the same implant with conventional techniques. More recently, cost-analysis studies have shown that robotic total knees are 26% more expensive and require more operative time and resources. Further studies have shown that robotic-assisted total knees require complex workflow adaptations and may not always alert surgeons to nuances of a particular case that may require intraoperative decision making by the surgeon. This may give surgeons a false sense of security that when they turn on the robot, they can stop thinking about the case. The same workflow adaptations require more steps to register the robot with the patient which includes drilling extra holes in the bone. The picture to the right shows two tracking arrays drilled into each of the tibia and femur.  This takes extra time and actually makes these cases more invasive than less.

Marketing campaigns by the parent company, hospitals and physician practices sell these claims to prospective patients who may be searching for knee replacement options. Patients may consume these promises, unaware that they are not fully backed by data which proves their value. Campaigns often show surgeons in freshly pressed white coats standing next to a surgical robot or smiling patients in a hospital gown as if fresh out of surgery.

Some of these companies also advertise that robotic total knees are custom knees. This is entirely false advertising. While the preoperative planning and surgical navigation may allow the surgeon to “customize” the placement of the implant, the implant itself is an off-the-shelf design that is not at all customized to the patient. Contrast this to the Conformis Knee System where each implant is truly customized in a patient-specific fashion. Conformis can be implanted with customized jigs that do not require a robot and ensure accurate implant placement to replicate a patient’s anatomy. The knee system used by the popular Makoplasty system was FDA approved in 2005 which means its actual design started well earlier than that. While patients may be getting modern technology to insert this implant, they are not getting a modern implant.

The other concept that patient must understand is that the principles and techniques of total knee replacement remain the same regardless of whether a robot is used. The application of a robot does not change the tenets of what makes a knee replacement successful, and the ingredients that lead to success go well beyond the surgical technique and the implant used. The reason the DaVinci has proven so successful is that it markedly limits the invasiveness of the procedure and this in turn reduces the likelihood of common complications such as abdominal scar tissue. Surgical robots in knee replacement have in no way reduced the invasiveness of the procedure and in some ways they have increased it. To therefore claim that they lead to a more rapid recovery that is strictly attributed to use of the robot and not other adaptations in the recovery process is just bad science. And the surgeons that so ardently defend the benefits of robots in knee replacement are too often conflicted by consulting arrangements with the parent company that ensure their continued use of the product. 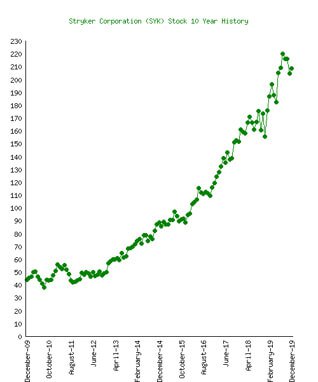 Make no mistake, joint replacement like every other aspect of healthcare, has become a huge business with tremendous forward growth. Companies that cash in on this trend have shareholders to answer to and growth projections to meet. Their incentive to move product and use robotic systems as a lever to sell implants is nothing more than a strategic business plan couched in a commitment to patient outcomes. The chart to the right shows the stock price of the Stryker Corporation, indicating a steep upward trend concurrent with the growth of the Makoplasty surgical robot.

Technology certainly has a role in improving the future of joint replacement and robotics may yet play a valuable role. At present however, the public needs to be aware that the current state of this technology relative to the merits it promises has not fostered value that reflects the significant added costs of the procedure. And these costs are passed on to consumers and taxpayers while stuffing cash into the coffers of companies whose profits can be used to further advertise the unfounded claims that sway patients toward these products. The message in these points is “Buyer Beware.” Ask for proof not promises and pick your surgeon not your technology.